The biggest professional e-Commerce
conference in the Baltics
Bringing together hundreds of participants each year from Baltic countries, Central, Eastern and Western Europe, the CIS countries, Asia and other regions of the world — including top-level business representatives, as well as other key players in the field of e-Commerce — this event offers a unique discussion platform on topics surrounding e-Commerce, as well as extensive international networking opportunities.
2500
participants
175
speakers
153
themes
48
countries
6 years statistics
Sponsors and partners
Co-organizer
Co-organizer
Gold Sponsor

Deloitte is world biggest consultancy firm, providing audit, consulting, financial advisory, risk management, legal, tax and related services to the client in more than 150 countries in the world.
DECTA, one of the most advanced processing centres and a leading provider of end-to-end solutions for payment processing, internet acquiring and payment card issuing to different customers worldwide.
Visa is the world’s leader in digital payments. Our mission is to connect the world through the most innovative, reliable and secure payment network – enabling individuals, businesses and economies to thrive.
Silver Sponsor
Partner
Partner

Web Shield, helps acquiring banks, payment service providers and other actors in the payments space to protect themselves from bad actors involved in illegal or non-compliant activities.
Oracle offers a complete portfolio of products, services, and differentiated capabilities to power your enterprise with artificial intelligence.
Investment and Development Agency of Latvia aims at increasing export and competitiveness of Latvian companies, facilitating foreign investment and implementing tourism development and innovation policies.
All sponsors and partners →
Conference speakers 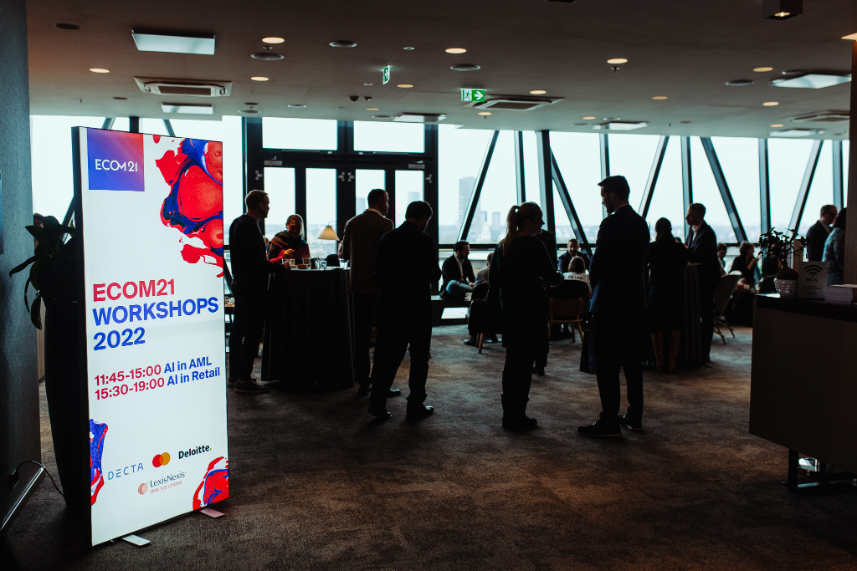 Thomas Holt Nielsen
Products & Solutions, Visa
There is always live communication at the ECOM21 conference: in expert sessions, in discussions with the audience and at the exhibition stands

Herman Van Rompuy’s presidency of the EPC follows an impressive career in national and European politics; a former economist at the National Bank of Belgium, he began his political career in 1973 as national vice-president of his party's youth council, before holding various responsibilities within his party and in the Belgian Parliament and government, serving in turn as Senator (1988-1995), Secretary of State for Finance and Small Businesses (1988), Vice-Prime Minister and Minister of Budget (1993-1999), Member of Parliament (1995-2009), Minister of State (2004), and Speaker of the House of Representatives (2007-2008).

At the time of his first appointment as President of the European Council in 2009, he was Prime Minister of Belgium. He was the first full-time President to take office when the Lisbon Treaty came into force. In 2015, King Philippe II of Belgium ennobled Herman Van Rompuy by making him an earl.

Dr. Ivan P. Yamshchikov
Max Planck Institute, Researcher & ABBYY, AI-evangelist
Dr. Ivan P. Yamshchikov is a researcher for AI and Cognition in Max Planck Institute for Mathematics in the Sciences in Leipzig, Germany, and an AI-evangelist at ABBYY. He is also a passionate educator with more than 10 years of experience in data analytics, focusing on popularizing AI and its versatile industrial and business applications. Ivan is also a co-founder of Creaited Labs (creaited.com) — a project focused on development of creative potential of AI.

Daniel Krištof
ČEZ Group, Director of Segment & Marketing
Daniel’s background is in leading transformations in world-class companies such as CEZ (leading CEE utility), Česká spořitelna (leading CEE bank) and RSA (global insurance). His mandate was using data driven approach for improving efficiency of the front-office organization. He will speak how to change management and organizational culture to allow for faster adoption of big data and machine learning technologies and how to improve digital awareness at senior management level and foster learning culture. He will share his views of the emerging role of Chief Data Officer (CDO): where to get or how to grow an effective CDO in a large company with successful legacy business model, is this a business or technology role.

Arkady Sandler
MTS, Head of AI
Arkady has more than 15 years of experience in e-commerce and later AI. Has joined MTS (Russian mobile operator) two years ago and successfully leads AI applications development since. He is a member of the group of consultants at Gerson Lehrman Group. During his entire career Arkady shares his knowledge through teaching at MBA and MA programs at the Russian Presidential Academy of National Economy and Public Administration and the State University of Management.

Neela Das
Accuity, Head of Innovation
https://accuity.com/
Neela Das leads Accuity’s global, multi-disciplinary innovation team with regional hubs in London, Paris, and Singapore. She is responsible for developing the innovation strategy, collaborating with the financial crime and payments business and technology teams across the globe. Her teams focus on driving ideas from concept to prototype quickly and efficiently using lean methodologies.

Neela brings a wealth of experience working in disrupted markets. She previously held the Digital Director role at New Scientist, and as part of the senior management team, developed and successfully implemented its digital strategy at a time when the publishing industry was experiencing unprecedented change.

At Accuity Neela’s projects have included everything from making use of geolocation data to PoCs for distributed ledger technology. She has a particular focus on the implementation of AI, collaborating closely with clients to uncover pragmatic solutions to their problems.

Thomas Holt Nielsen
Products & Solutions, Visa
Thomas has 15 years of experience in card payment industry and the last 5 with Visa. Mr Nielsen has gathered great experience from card issuing banks and processor across many themes. At Visa he has the last two years been leading Nordic e-commerce initiatives and the last year in Nordic lead of the implementation of Strong Customer Authentication and related services. AI plays a pivotal role in the services that we develop for SCA and many of Visa’s risk related services.

Roman will present the unique workshop: Digital Marketing in B2B. How to boost your b2b sales using the latest tools of paid social marketing.

Agur Jõgi
AskRobin,Founder
Agur Jõgi is an innovator, founder, experienced manager, and technology enthusiast. He performs best when creative solutions are needed for "impossible to solve cases". Starting-up a new idea or a company, planning and delivering a complex strategy change in an established company are situations he enjoys the most, because it’s an opportunity to learn something new every day. He uses his strengths and hires a team to cover for his weaknesses. One man can lead, but constant delivery comes from teamwork.

Agur’s professional life is mostly related to tech and product people management in companies of various capacity in IT, telecommunication and

Jolanta Rema
airBaltic, VP of Commercial distribution
In 2004, under her leadership, airBaltic implemented airline’s first online tickets sales system, without which today’s airline business is unimaginable. Since then, J.Rema has introduced online sales for various ancillary services and now has undertaken leadership of the company’s digital marketing team.

Nowadays good UX&UI is no longer enough to engage users of website and convert them into customers. Big data or everything we know about our website visitor and customer has become an integral part of the company’s commercial strategy. At the conference, J.Rema will take you on a journey of how does the Baltic’s largest airline use those data to offer customers the right product at the right time.

Donal Greene
Innovatrics, Regional Manager EMEA
A native of Dundalk, Ireland, Donal is currently based in Slovakia and has a strong track record in biometrics, managing strategic partnerships in Europe, the Middle East, and Africa for Innovatrics, a global leader in identity management technology.

Passionate about technology, Donal believes that biometrics plays a critical role in developing robust and secure identity ecosystems. This demand was traditionally driven by government and law enforcement, however he believes that we are on the cusp of a period of exponential growth in the use of biometrics in enterprise, particular in the area of regulatory technology, or RegTech